The Night I Squished a Frog Between My Toes

As I've aged, I've gotten much better at remaining calm and rational in stressful situations. This is exactly the opposite of how I was as a child, when it didn't take much for me to reach the conclusion that I, and everyone I loved, were about to be obliterated in the most horrible way possible.

To illustrate this point, I'll share a story of one particular evening from my youth. I'd like to say that I was 5 years old when these events took place, but when I reflect back on the details of the story, I have to admit that I was 11 or 12.

My parents had gone out for the night, leaving my older sister in charge. Soon after they left, my sister's friend came by, and they went out to rent a video, leaving me alone in the house.

As soon as I was alone, my house, which ordinarily felt like a very safe space, suddenly seemed more like this: 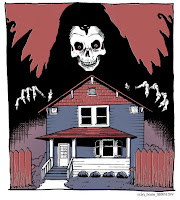 Soon after I was left alone, I heard a brief, shrill, alarm-like shriek. I stopped dead, broke out in a cold sweat, and waited. As soon as I'd decided everything was fine - "EEEE!!!!" - the shriek came again.

At that point, I came to the following conclusions:
With this newfound understanding of our home's breached perimeter, I knew I had to spring into action. I quickly pulled together a home security posse including my dog Annie (on whom I put a leash so she wouldn't wander off), a baseball bat, my stuffed monkey, and a terrified 11- or 12-year-old girl. I marched this posse from room to room, checking for intruders behind every door, under every bed and in every closet.

As I came up the stairs from the basement, the "EEEE!!!!" sound blasted right over my head. In full-tilt panic mode, I screamed, threw the baseball bat, and sprinted up the stairs, tightly clutching my stuffed monkey and Annie's leash. 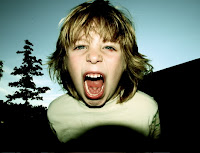 [Poor, sweet Annie. She must have been so confused by this whole ordeal. Why am I on a leash in the house? Why is my human carrying a bat? Why are we running?]

When I started to breathe again, I took a moment to recenter in reality and realized that the smoke detectors were making the intermittent shrieking sounds. So, even though I had just walked through every room and surely would have noticed if any of them were on fire, I decided there was a fire in the house. Therefore, I called 911.

Apparently nothing of interest was going on in town that night, because a firetruck arrived in about two minutes. Several uniformed firefighters stormed into my house and began searching for a fire (while intermittently casting down concerned/confused glances at the girl with the leashed dog and stuffed monkey). After a few minutes, when it became clear to everyone that there was no fire in the house, one of the firefighters asked me what the problem was. I told him that the fire alarms had been going off, and he explained, with a saintly degree of patience, that fire alarms emit warning beeps when they have low batteries, are dirty, or have spiders living in them.

The disgruntled firefighters began to file out of the house. After leading them to the door like a good hostess, I noticed headlights in the driveway. Oh, no! I thought. My sister's home! She's gonna see the firetruck and have a heart attack! As I dashed down the front steps, I felt my foot squish into something but ignored it because my primary concern was for my sister. I ran towards the car, waving my arms in the air like a lunatic. [In the moment, I believed the arm-waving would indicate: "Look at me! I'm fine! There's nothing to worry about!" But when I think back on it, the running + arm-waving must have looked more like: "AAAAHHHH!! SAVE ME!! I'M IN THE PROCESS OF BEING MURDERED!!!!"]

Anyway, it wasn't my sister. It was a police car. The officer, alarmed by my frantic running and arm-waving, stepped out of the car and asked if I was okay. I came to an abrupt halt, dropped my arms, and mumbled, "Oh...yeah. I'm fine, thanks," then turned around and walked back to the house, utterly humiliated by every single one of my actions that night.

Upon reaching the front steps, I looked down to see what I had stepped in, barefoot, during my panicked run to the cop car, and discovered a dead, decimated frog that one of my cats had killed and left on the doorstep.

And that, friends, was the icing on the cake of my evening alone.

Al Etreum
Aside from some photos of my dogs and me (and the photography featured in Why I Take Pictures), all pictures depicted in I.S.W.A.R. posts have been snatched from Google Images. I hope I'm not breaking copyright laws...but I figure, if I'm not making any money off of this stuff, who in a capitalist country would care? [P.S. - I've moved. You can find me here: kellywolflovesdragons.com.]